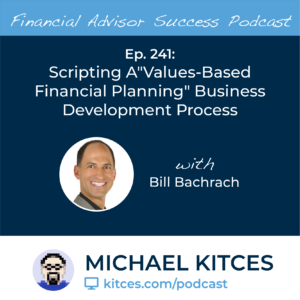 Welcome back to the 241st episode of the Financial Advisor Success Podcast!

My guest on today’s podcast is Bill Bachrach. Bill is the Chairman and CEO of AdvisorRoadMap, which provides training and mentorship to help financial advisors better attract and communicate with their ideal clients.

What’s unique about Bill, though, is that as the creator of the values-based financial planning framework and the father of the now-famous question – “What’s important about money to you?”- he pioneered a repeatable process to put a client’s values and goals at the center of the financial planning conversation at a time when the industry was still focused almost exclusively on product sales.

In this episode, we talk in depth about how Bill’s “What’s important about money to you?” question not only gives advisors a powerful way to start a meaningful conversation, but also gives prospects an opportunity to communicate the value that they’re seeking from a financial planning relationship, how that opening question is just a part of Bill’s script for having values conversations with prospects to create a foundation of trust and, ultimately, helps advisors (as Bill puts it) rescue prospects from their current advisors, and how Bill uses his values roadmap as a deliverable to visually show prospects the steps that they can take in order to fulfill their most deeply held values and achieve their most important goals.

We also talk about Bill’s five prospect conversations (each of which occur during the first prospect meeting, including the Opening, Values, and Goals conversations, as well as All The Money and Commitment To Hire steps), Bill’s techniques and suggestions for leading those conversations without overly “controlling” the conversation, and how recording prospect conversations for later review not only helps advisors build even more trust and relevance, but also ends out helping advisors learn to listen more, say less, ask better questions, and answer prospect questions more effectively.

And be certain to listen to the end, where Bill shares his recommendations for helping prospects more concretely identify and define their goals, with not just the name, target date, and cost, but also the emotionally compelling words that describe what achieving that goal will feel like (to include on their financial roadmap), why Bill feels that it’s an advisor’s obligation to take full advantage of the financial planning tools that are available to them (and why doing so makes it even easier to “rescue” clients away from other advisors who don’t), and Bill’s view that trust isn’t a function of an advisor’s technical chops, but is instead a function of character, the ability to ask good questions, listen, and ultimately hold clients accountable to the advice that they’re given.

So whether you’re interested in learning about how Bill’s “What’s important about money to you?” question, his five prospect conversations, or how financial advisors can build trust, then we hope you enjoy this episode of the Financial Advisor Success podcast, with Bill Bachrach.

END_OF_DOCUMENT_TOKEN_TO_BE_REPLACED

We use cookies on our website to give you the most relevant experience by remembering your preferences and repeat visits. By clicking “Accept”, you consent to the use of ALL the cookies.
Cookie settingsACCEPT
Manage consent

This website uses cookies to improve your experience while you navigate through the website. Out of these, the cookies that are categorized as necessary are stored on your browser as they are essential for the working of basic functionalities of the website. We also use third-party cookies that help us analyze and understand how you use this website. These cookies will be stored in your browser only with your consent. You also have the option to opt-out of these cookies. But opting out of some of these cookies may affect your browsing experience.
Necessary Always Enabled

Performance cookies are used to understand and analyze the key performance indexes of the website which helps in delivering a better user experience for the visitors.

Analytical cookies are used to understand how visitors interact with the website. These cookies help provide information on metrics the number of visitors, bounce rate, traffic source, etc.

Advertisement cookies are used to provide visitors with relevant ads and marketing campaigns. These cookies track visitors across websites and collect information to provide customized ads.

Other uncategorized cookies are those that are being analyzed and have not been classified into a category as yet.